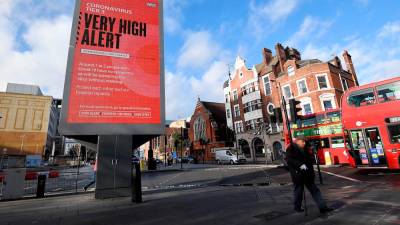 LONDON: British Prime Minister Boris Johnson was holding a conference call with his senior ministers today to discuss concern over a new strain of the Covid-19 virus which is rising across parts of Britain, his spokesman said.

Johnson will later hold a media conference with the government’s chief medical and scientific advisers amid suggestions that he will announce new measures to try to curb the spread of Covid.

The government on Monday said a rise in infections might be partly linked to a new more transmissible variant of the virus when it moved London and other swathes of the country into the highest tier of restrictions.

Johnson said yesterday he hoped that England would not need to go into a third lockdown after Christmas, but scientists have warned that urgent action might be needed to curb the spread of the virus.

Britain reported 28,507 new Covid-19 cases yesterday and 489 deaths, with the reproduction “R” number estimated to be between 1.1 and 1.2, meaning the number of cases is rapidly increasing.

“This is a very major concern,” Jeremy Farrar, director of the Wellcome Trust and a member of the Scientific Advisory Group for Emergencies (SAGE), said on Twitter.

“Failing to act decisively now, will mean further suffering. We must keep asking ourselves ‘are we doing enough, are we acting quickly enough’.”

Johnson has so far resisted calls to change the government plans to ease restrictions for five days over Christmas, allowing three separate households to meet indoors.

Sky News reported that SAGE would meet on Monday to discuss how the current three-tiered system of restrictions could be beefed up while the Daily Telegraph newspaper said ministers could announce curbs on travel between southeast England, including London, and the rest of the country.

“It has been apparent for some days that the virus is again out of control in parts of the country,” Jonathan Ashworth, the health spokesman for the opposition Labour Party. “The government’s tiered system has failed to stem its spread.” ― Reuters

LONDON, Dec 19 (Reuters) A new strain of COVID-19 identified in the United Kingdom can spread more quickly and